Defines a one-to-many dependency between objects so that when one object changes state, all its dependents are notified and updated automatically.

How does it work?

Why is this useful? 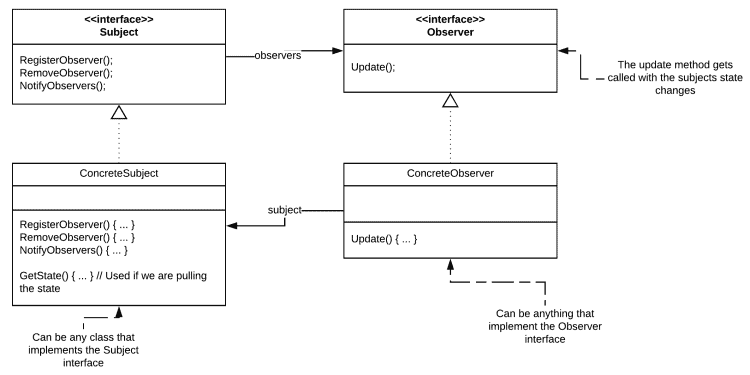 For this example, we are going to mock out a notification system that will notify its clients when it gets a new message.

First, we need to create the interface for Subject. Take another look at the UML Class diagram above for reference if you need to.

We also need to create the interface for Observer.

Now for the good stuff. Below you will see that we are creating a class that implements the ISubject interface. Take a close look at the implementation of the three methods in this class.

Above we have a list of Observers that we add to when we register a new observer. We also have the ability to remove the observer and we can notify all observers by iterating over the list of observers and calling the Update() method.

Now that we have a subject, we just need an observer to subscribe to the subject. Let’s do that now.

Above we have a class called Client that implements our IObserver interface. We can see that it is passed in a subject and is subscribing via the RegisterObserver()  method. We also see in the Update()  method we are simply writing to the console.

Now that we have an implementation of the Subject and Observer, it’s time to use them.

In the above code, we are creating a new NotificationSystem and then passing that into our new Client. We are then calling the NotifyObservers() method and passing a message. If you run all of the code in this example you will see “From Client: This is my message!” printed to the console.

You may have noticed in the example above that we did not create a GetState() on the subject. This is because I wanted to show you how pushing the state works. The Observer Pattern can be implemented two different ways.

I hope you have found this post helpful in learning about the observer pattern. If so, please share this with your fellow developers so that they too can learn.